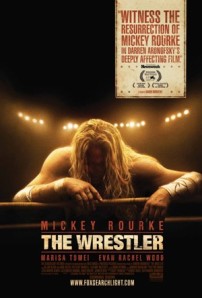 A perfect review for a perfect movie – impossible! I only hope I won’t do it injustice. Hardly do I experience movies that touch me so deeply. On the emotional level, it left me heartbroken and immensely sad, but at the same time, excited, enlightened, and happy.

“The Wrestler” is a picture full of realism, feelings, and reflections about little and big things. It’s a movie about life. There’s no pretending, no falsity. Instead, there’s sincerity in every single scene. There are no banal dialogues, or artificial acting. A viewer is introduced to 3-dimentional characters, fascinating in all their imperfections. They live and breathe the same as we do.

Randy “The Ram” Robinson – his story gets to me more than I want. I have ambiguous feelings about him: love and hate, pity and admiration. Mickey Rourke’s performance is far beyond any expectation – he’s true and honest. I feel his sadness, his loneliness, his broken heart. Momentarily, it’s hard to distinguish whether I watch a character, or the actor. Brilliant!

I cannot forget about Cassie/Pam, by far the best portrayal of a stripper I’ve seen. Marisa Tomei is unforgettable and amazing. She embodies a fallen woman, proving it is the raw life that hurts more than the fall itself. She is a biblical Mary Magdalene on her way to redemption. In these terms, Ram is almost like Jesus, who wants to make a decent woman out of her.

As far as the father-daughter relationship goes, it’s presented in the most realistic way imaginable. During those few scenes with scant dialogues I see more truth about life than in any other movie. Every scene with Ram and Stephanie, his daughter, is both beautiful and painful to watch. In their last meeting, which ends up in a fight, there are absolutely no unnecessary words. There is accusation, and rejection. Many fathers and daughters know it too well.

One more thing I can’t get out of my head – the locations. The towns and their suburbs reflect the state and shape Ram is in. Ram, in return, personifies those places. They are always strikingly empty, dirty, neglected. They seem sad, haggard, unwanted, avoided. Just like Ram – his as sad as an empty place nobody wants to visit.

The ending is as it should be. It doesn’t matter what happens afterwards. It may be called ambiguous, but could there really be any other ending? I think the most important things are said and done within these precious 111 minutes. Any other ending would be unsatisfactory.

“The Wrestler” left a scar on me. Along with the scar, there is a vestige of solitude inside me. I’ve already watched it several times, and it seems emotionally impossible for me to watch it again. Yet, I don’t have enough. It is a deep, thought-provoking movie packed with feelings I long forgot I could feel. If you ask me if it’s worth watching, I say like no other movie ever.

One thought on “…vestige”