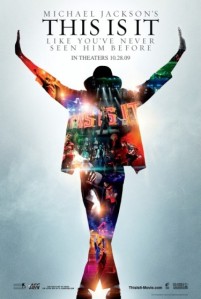 This documentary is an amazing experience opening before us MJ’s tremendous rehearsals before his last tour. This is magic. This is It.

It takes us to a world of Michael Jackson the King of Pop. The Michael Jackson we see is a tremendous professional entirely focuses on his performance. He’s a volcano of positive energy that passes on the audience. And that’s the best part. A viewer’s attention is drawn to the screen as a moth is drawn to light. It doesn’t feel like watching a documentary on MJ; it rather feels like actually being there. At some point, I forgot I was at a movie theater. I had a sense of taking part in his rehearsals.

The documentary revolves around MJ as he works on stage with his crew (the director Ortega, dancers, singers, musicians, etc.) to prepare for his last tour. We see him perform his most famous songs, one by one, and discuss how they should be organized during the concerts. He knows exactly what he wants, at the same time, remembering he’s doing it for his audience, his fans. What’s also striking is the fact he is physically up to singing and dancing and making sure everyone else’s performance is spot-on, all simultaneously. He accepted nothing less than excellence. That’s what I call pure professionalism.

The documentary starts with his dancers, tears in their eyes, expressing that it is a dream-come-true moment to dance for Michael Jackson. It’s the only time when we’re allowed to be moved to tears. And it’s still the very beginning. What comes next is his songs and dancing. There’s no forced sentimentalism, no unnecessary talking, pointless interviews and close-ups on despairing fans. Fans, money, and health are not the issue here. The intention is to show an amazing performer, not to follow gossips and cheap sensation. I believe it presents MJ’s true face.

“This is it” takes us to a magical world – the stage is the whole universe here. As we see how each song is rehearsed, we think of excellence, hard work and genius of MJ’s performance. Each song has a different setting, background, and organization. Clearly, each is unique for MJ. This documentary is remarkable – it invites us to spend 2 hours of MJ’s career, to listen to his memorable classics, to admire his creativity as a dancer, and to experience sounds, colors and feelings we have never experienced before. This is a must!