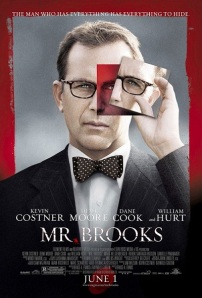 What does Mr. Brooks share in common with Patrick Bateman and Norman Bates? They all are psychopathic killers. Yet, all similarities end here.

The movie opens with Mr. Brooks (Kevin Costner) being awarded Man of the Year. The first impression is that Mr. Brooks is a businessman both prosperous and honest, a decent man that has worked hard to build his company. Then, after a glance at his lovely wife Emma (Marg Helgenberger), we can be sure he is also a family man, dedicated to his wife and daughter. An upstanding citizen, indeed! With all that said, the perfect bubble is shuttered in front of our eyes – Marshal (William Hurt) appears out of the blue. Within the first few seconds, Marshal introduces doubt and anxiety. We are not even sure where he has come from. Bruce A. Evans leaves us with this conflicting image of Mr. Brooks just to prove that it is still possible to get out the box, so to say, and show a serial killer in a different light.

“I don’t enjoy killing, Mr. Smith. I do it because I’m addicted to it.” Mr. Brooks is an addict. Unlike alcohol or drugs, his addiction does not kill him, but others — literally. There is nothing what stands behind the killing. There’s no philosophy behind it. Mr. Brooks is not judgmental — he chooses his victims quite arbitrarily. He simply follows an urge to kill, the urge personified by Marshall. Yes, at some point, Marshall concludes the murder night by saying that Brooks is an artist; however, for a drunk a bottle of Jack Daniels is worth more than Mona Lisa. Anyway, we might speculate who Marshall is — a hallucination, a symbol of Brooks’ split personality, a Hyde to Brooks’ Jekyll — but there is no certain answer. What is certain is that Marshall has become an integral part of Mr. Brooks, a part of him that is cunning, clever, and highly dominating. And there is no escaping from him.

As we observe Marshall and Mr. Brooks conversing and meticulously planning the killings, a new character enters the stage — a very nervous and untrustworthy guy, calling himself Mr. Smith. Mr. Smith, as the name correctly suggests, is nobody. He has a high opinion of himself as worthy of being Mr. Brooks’ killing partner; nevertheless, he is no match for him. Brooks is superior to Mr. Smith in every way. He first let us believe that Mr. Smith is becoming his protégé, but in fact tricks us just the way he has been tricking Mr. Smith. At some point, it seems that Mr. Smith has been the intended victim from the start. Mr. Brooks let him get closer to himself to get to know him better, maneuver him into leaving his DNA at one of the crime scenes (a flash of genius), and eventually to satisfy his own urge to kill. When such a friend turns to foe, Mr. Smith doesn’t stand a chance.

The core of the movie is playing cat and mouse, a dance of death between Smith and Brooks and Marshall. Each of them tries to outwit the other: Smith wants to feel a rush of killing somebody; Brooks wants to stop the addiction; Marshall wants to go on with the killings because it fuels him. Towards the end we are made to believe that Brooks actually wants to die at the hand of Mr. Smith. On second thought, how can we possibly believe that Brooks would let a miserable loser like Smith kill (read: overpower) him. The mouse realizes the overwhelming predicament (never go to a cemetery with a serial killer, dah!) and the crushing power of the cat.

Bearing in mind how well the Brooks/Marshall-Smith plot is constructed, I’ve asked myself a question: why do we need Detective Tracy Atwood (Demi Moore)? She serves merely as a shade to the story. As cruel as it sounds, her character doesn’t even push the action forward. She is supposed to epitomize the resisting force to Mr. Brooks, but she doesn’t convince us that she can actually catch Mr. Brooks. Besides, she doesn’t attract interest enough (an allegedly strong, independent woman, who can’t deal with her own divorce). Why should we care for her money, or her reasons to become a cop? Her failed marriage scarcely prepares ground for another murder (which, by the way, develops Brooks-Smith plot). Plus, her way of uncovering Mr. Brooks’ method of killing and figuring out his train of thought (which boils down to wandering around the apartment of a dead couple) is completely unnecessary since Brooks and Marshall do it for her tad better (for example, whispering to each other, or exchanging glances in the rear-view mirror). Beyond the shadow of a doubt, as a detective, she is far from being so brilliant as Detective Lt. William Somerset (played by Morgan Freeman in Se7ev) or Dr. Alex Cross (also Freeman in Kiss the Girls and Along Came a Spider), to name just a few– both investigators are intelligent enough to convince us that they have a chance to catch the serial killer. Det. Atwood is not.

The strong point of the movie is a perfectly matched couple: Kevin Costner and William Hurt. We can see amazing chemistry between them, as if they were made to play together. Their physicality may differ much, but their similar gestures, conjoined logic of their characters, and an irresistible need to kill are uncanny. Even though there are frictions between them, especially when Brooks tries to free himself of Marshall, we surely cannot resist them.

The ending of the movie (by no means, of Brooks’ story) would satisfy fully if the creators did not decide to throw in a dream scene with the daughter. Although Jane (Danielle Panabaker) is an intriguing character, and I expected her to attempt to murder her father (a feministic version of Oedipus Complex about killing one’s father, perhaps?), her story is underdeveloped and serves only to force Brooks to take initiative to protect his family. Yet, I would definitely like to see more of Jane than of Det. Atwood. Atwood does not stand out, whereas Jane’s slightly devilish grin is unforgettable.

“Mr. Brooks” is an inconspicuous film. Underneath another story about a serial killer, there lies a story of a terrifying relationship between an addict and his addiction. Fortunately, it is far from pretentious and moralizing. As we become familiar with Brooks, by the way, always presented in clean and neat spaces with warm color (his study where he keeps his killing “tools”), we sympathize and identify with him. We root for him and hope for him to get away with the murder (no pun intended). Except for Det. Atwood, the weakest link of the movie, everything else is excellent.