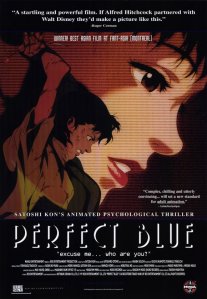 This movie invites us to a world that is an unwelcoming and evil place. People hide dark secrets and cannot cope with reality. Why then should we get deeper into this ominous world? Because this is a fascinating anime masterpiece. Once we step into the world of Perfect Blue, we won’t be able to tear away.

The story is meticulously woven and beautifully executed to evoke in us a wide range of emotions: fascination, fear, sympathy, confusion, even disgust. We closely follow one girl, Mima, who is an ex-pop star turn into an actress. As she retires from her singing career and begins a new career on a completely different ground, she leaves a bunch of disappointed fans. One of them, in a strange and sinister way, harasses her, sending threatening letters, and keeping an Internet blog. The blog is supposed to be written by Mima herself, by the “old” Mima, the pop idol. As Mima, the “new” Mima, the aspiring actress, reads next posts, she becomes confused whether, after all, it’s not her alter ego is writing all this. 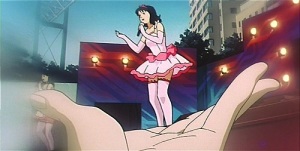 There is another layer of the story: Mima’s acting career. Initially a one-line part, Mima’s character in a popular TV drama is developed. Quite disturbingly, the events in her character’s life coincide with her own. From the very beginning, the scenes from the set intermingle with the scenes from her life. Everything is linked. Her lines sound like comments and dialogues from her life. The effect is spectacular. We are baffled, unsettled, and discomforted. The harder we try to figure out what’s going on, the more puzzling it gets. Satoshi Kon masterfully merges reality, fantasy, and movies. 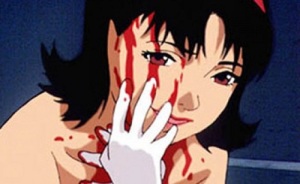 When we watch Perfect Blue for the first time, now in the era of fancy animations created with newest advanced technologies, we can’t deny how old-school it feels. Mima doesn’t know how to use a computer, not to mention the Internet. Yet, she gets the hang of it pretty quickly. But somehow the characters and the world around them seem so much more realistic. The characters are not extra cute. Quite the contrary. They are imperfect, flawed, even ugly and revolting. At the same time, we believe they exist, we believe their behaviors and sense their intentions (though nothing is what it seems in this movie). There are those nuances in introducing and presenting them that make us suspect things which will eventually (not necessarily) turn out true. These small nuances are like inconspicuous hints, warning us about their two-faced nature. 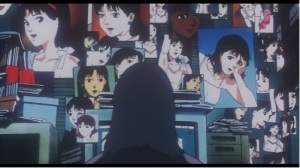 Astonishingly, Perfect Blue shares a lot of similarities with Black Swan. The female characters, Mima and Nina (even the names sound the same but one letter), are the main reason. They both go through a transformation in their personal and professional lives. They go a long way from an innocent good girls to sexually-liberated women. At the same time, they struggle with personality issues, they see things that aren’t there. Interestingly, both movies use mirrors to present their character’s inner disturbances. Also, there are some similarities (not all!) in the ending, but I’m not gonna spoil that for you. 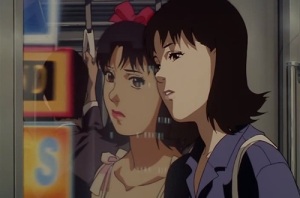 I encourage you to give Perfect Blue a try. Not without a warning, though — it’s a dark and creepy movie. It’s a perfect study case of paranoia and stalking. Reality intertwines with illusions and movie scenes. None of the characters is to be trusted. Kon focuses on crudeness and ugliness of life, not avoiding, at times, shocking sexual allusions and images. We would not want to live in that world, but we don’t want to leave it either. We care about Mima, and can’t wait to witness an intense and terrifying culmination.