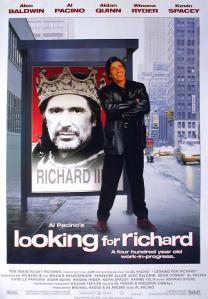 When the movie begins, there are images of an English castle and an American apartment building. From the first shots, Al Pacino tells us he wants to draw an analogy between the traditional and the modern. On the surface, he wants to make a movie based on Shakespeare’s play Richard III. However, it soon becomes obvious his intentions get deeper than that. Not only does he want to act out the play, but also to make people understand it. His methods are quite extraordinary.

Pacino asks questions, and questions everything. Does the play have anything to do with our life? Is it relevant at all? Pacino interviews different people about Shakespeare and about Richard III. What is unusual about those interviews is that he asks regular people in the streets. Without being judgmental, he wants to know whether they read Shakespeare. There are as many answers as the people he asks. As we could expect, some of them praise the bard as a terrific playwright, who left us guidance how to talk about feelings and emotions. Others respond that they do not read him or he is boring. Then, we have a few brief interviews with British actors (Kenneth Branagh, Derek Jacobi), who remember their first experience with Shakespeare. There is a contrast between all those statements. Clearly, Pacino signals he is interested in making his audience understand the play, making it accessible for those very people who avoid Shakespeare like fire.

There is the other side of this coin. We cannot be sure whether Pacino is not manipulating us, steering us to have a certain attitude toward the play. He must have interviewed more people, but he shows us only what some of them said. He uses his reactions for his own purpose. And what is his purpose? As we watch the movie, it feels like Pacino wants the viewers to enjoy the play. He underlines it is a matter of opinion, not a question who is right or wrong about the play. He even goes as far as to say that we do not have to understand the meaning of all the words. Instead, we need to tune in to Shakespeare’s “music.”

I keep referring to Looking for Richard as a movie. However, is it a movie? It is partly a documentary, which at times feels it is more acted out than spontaneous, and partly interviews with Shakespearean scholars, and partly the play itself. This hybrid works perfectly to make the play understandable. First, we witness the actors talking their parts through, wondering about their characters’ motifs and intentions. Second, we see those scenes: the actors in their costumes, speaking their lines, the lines we already know since they have just been explained to us. Now, the play is crucial here, but not the main focus of Pacino’s movie. The interviews, especially when they walk the streets, seem to dominate. This movement, constant walking the streets, adds a lot of dynamism. It feels like the play interrupts those interviews, as if it was a punctuation mark in Pacino’s rhetoric. The play intertwines with normal, everyday life, and, more importantly, there is a place for it there.

As for the play, Pacino strips it off its theatricality. During the scenes of Richard’s soliloquies, everything he says is shown. In other words, when Richard speaks of his brother Clarence, we see Clarence when he interacts with other characters, but we cannot hear what he is saying. It makes an impression that all those scenes are just a background. This trick would not work on a theater stage. Thus, we become acquainted with the characters, their names, and their positions – when a character is named, his or her face pops up. Before each scene, the actors rehearse. It helps them delve deeper into their roles, and us connect all the complex relationships between the characters. Plus, another brilliant trick is used with introducing new characters. When we read the play, the first thing is the Persons of the Play. It confuses us – we cannot expect to memorize all the names and functions at once. Pacino does differently. He introduces the characters gradually. When the actors come to a scene with Margaret (Estelle Parsons), they talk about her role in the play. The talk is accompanied by the actress playing Margaret in costume (once again, a sort of background scene when she speaks, but we cannot hear her) and then quickly enough the same actress in the rehearsal. In the same fashion, Pacino spends some time to debate the role of Lady Anne (Winona Ryder). He signals us that those characters are significant.

Towards the end, I noticed a change in Pacino himself. In the beginning, he looks like a hobo: his hair is messy under an old cap, his clothes are scruffy. Then, Pacino changes. His hair looks neater, and he is wearing a suit. Even if very subtle, these changes correspond to Richard’s change in the play. Richard rises in power, turning from a hunchbacked freak of nature to a king. At this point, the documentary part and the play part start merging. Those two realities – the, let’s call it, real life and the fictional, Shakespearean life – transcend. They are not separate anymore. Still, the play does not dominate. Rather, it proves it has the power to affect our lives. For this reason, I use us, by which I mean us the readers of the play, us the viewers of the documentary, and us the witnesses of this merge between life and art.

Pacino does not forget about Shakespeare’s language. He presents those mini “lectures” how to approach it. As mentioned, he believes we do not have to understand every single word. Many words are frequently repeated, though. Thanks to this trick, we get acquainted with them, immediately recognize them and their significance in the text. When they talk about the play’s beginning, they stress how important it is to start with the word ‘now’. They claim it wakes up the audience. After that, we jump to a scene when Pacino speaks the play’s opening in a soft, low voice, contradicting the previous statement. When they explain iambic pentameter, they even repeat this name several times. The actors present the sound of it, clarifying a complex concept into a simple thing. Finally, Pacino reflects on the famous: “A horse! A horse! My kingdom for a horse!” He combines a short interview with one driver about it with an actual scene from the play, repeating the catch phrase many times until we fully grasp it.

Last but not least, Pacino adds humor to his movie, which tells us something about his attitude towards Shakespeare. It is not a serious matter. Reading Shakespeare does not have to be limited for actors and academics. Pacino constantly hints at that by adding a few gags. When he is reading the play, he lifts a huge, heavy, leather-bound volume, pretending he’s overwhelmed by it. Immediately, there is a cut scene to him sitting with a paperback version of the play. It does not matter what the book looks like. After all, the content is still the same. When he visits Shakespeare’s birth place with his fellow actor, they contemplate it in a reverent way until they hear a firetruck. Apparently, something triggered a fire alarm. The scene becomes ridiculous and ridiculously funny. Pacino could have cut it out of the movie, but he left it intentionally. When they need to leave Shakespeare’s house, one of them says, “It’s a bummer!” Without a warning, we move quickly to a shot with a woman scholar, explaining something in a serious way. This contrast works perfectly since we still remember the firefighters in Shakespeare’s house. Finally, the play comes to an end. Once Richard dies, one of the actors say, “Are we done?” Pacino does not let us become pensive. He tones down the play’s ending. He does not want to leave us with a feeling that Shakespeare cannot be entertaining.

Al Pacino invites everyone – kids and adults, actors and scholars – to look for Richard. He invites us to find something we could call our own when reading the play. He does not intend to enforce his own opinion on us, but encourages us to give the play Richard III a chance. He finds filled with genuine emotions and real, flesh-and-blood characters. His vision of talking about and presenting the play is intriguing and fascinating. Pacino’s movie is not “Shakespeare for dummies,” but rather “Shakespeare for everyone.”