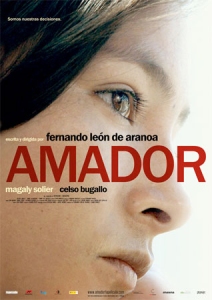 Marcela is an extraordinary character. She’s timid, taciturn, modest. She’s also uneducated and poor. But in her sad, dark eyes, there’s understanding that doesn’t come from knowledge, and ambitions that don’t come from social status. She speaks the most when she doesn’t speak at all. Her story fills the center of the movie. The themes of love, life and death are filtered through it. She experiences all of it, which makes her richer and stronger inside.

Marcela (Magaly Solier) lives with her husband Nelson in a poor neighborhood. They sell flowers in the street and barely can afford food or rent. In the opening scenes, we see that she’s intending to leave Nelson (Pietro Sibille). She no longer sees any future by his side. It’s not only the money, or rather the lack of it. And it’s not the lack of love, either. He shows her affection occasionally. She simply wants more form life. There’s another person in her life: her unborn baby. She must learn how to love him although she’s full of doubts and fears about their future. Finally, there’s Amador (Celso Bugallo), an old and sick man, who requires a constant care. He appears cold and distanced, at first, but later on, we find out there’s an amazing love story with him, revealed through letters.

Love and death are companions in this movie. Marcela, for one, represents both. On the one hand, being pregnant, she does everything for her child. On the other, she used to abort her other child a couple of years ago. Curiously, her new child is sending her all kinds of hints that he wants to be born. With the stress, lack of proper food, and one pill-overdoes incident, it’s unbelievable the child survives. Almost a miracle. Then, death enters the story. Amador dies unexpectedly in the exact moment of placing one piece of a puzzle. He’s literally frozen with this piece in his hand. Marcela panics – she just started taking care of him, a job she desperately needs. Once Amador kicks the bucket, she’s not entitled to the rest of the pay for the month. Since desperate times call for desperate measures, Marcela decides to pretend Amador is still among the living. And, in a grotesque manner, he is dead but still present. However, she can’t wipe her problems under the carpet so sooner or later she’ll have to face Amador’s family and friends as well as his neighbor complaining about the foul smell coming from Amador’s apartment.

As serious as it sounds, the movie’s as much a comedy as it is a drama. We may call Marcela naïve and confused, at times, but she’s also very lucky. Every time she thinks she’s done for, somebody or something helps her, and her little secret about Amador, lying stiff dead in his bed, is safe. One of the most hilarious scenes is a dialogue between her and a priest – a word game about not being able to let go of loved ones who passed away. It proves how innocent and good-hearted Marcela is, having a hard time dealing spiritually with Amador’s death. Also, the character of Puri (Pietro Sibille), the not-so-young prostitute, visiting Amador once a week, adds a lot of comic relief. Energetic Puri means well and becomes a sort of mother figure for the young girl. She doesn’t give away her secret. Interestingly, Puri represents Mary Magdalene, while Marcela stands for the Virgin Mary with her piety and innocence.

“Amador” makes a pleasure watch, but falls short in explaining the thread with a girl in the wheelchair. Here, Aranoa’s message strikes as vague. In fact, the movie would be as good without it. The rest of the movie absorbs and charms. The element of piecing together a puzzle nicely intertwines with the story. It goes both for Amador’s puzzle, Marcela’s goodbye letter for Nelson (she shreds to pieces), or a picture of him and another girl she finds accidently (also torn). Here, the message is clearer: combining together separate pieces of the same puzzle may be more revealing than the image itself. Aranoa packs the movie with many such messages, but doesn’t burden us with them. He hides them in-between the lines and gestures. They’re not served for us on a plate. If we want to know them, we have to look for them. Similarly to the puzzle, uncovering the whole story becomes an engaging and pleasurable task.