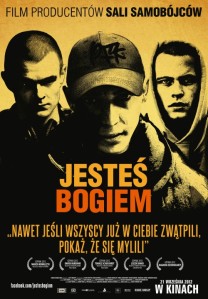 To be a young rapper means being an artist. And when an artist thinks he is god, the world is not enough.

When Magik (Marcin Kowalczyk), Fokus (Tomasz Schuchardt) and Rahim (Dawid Ogrodnik) speak, they make mistakes, confuse words, mispronounce. But when they start to rap, it becomes the most natural thing in the world. Making music, going with the flow with words and rhymes is the essence of their lives. They turn their personal issues and experiences into lyrics. As long as they can express themselves through music, everything else falls into place. Through their music they give vent to anger, disappointment and fear.

The reality seems at times cruel for the members of legendary band Paktofonika. Fokus is struggling with finishing high school, or rather not being kicked out of one. Rahim has to deal with a tough physical job. Magik faces responsibilities of unexpectedly becoming a husband and a father. For young guys as they are it all may overwhelm. Yet, the truth is their hardships aren’t convincing. After all, they come from normal families. Like in all normal families, they have financial problems, but apart from that, the movie presents them as quite regular. For this reason, it’s hard to understand what the conflict is here. Is it only the artistic pain, perhaps?

The creators try to combine the difficulties of publishing hip hop music (the kind that doesn’t tone down, refuses to play nice, the Paktofonika kind) with personal struggles in their lives. However, the story seems choppy. We don’t get to see the full story behind their first sleazy manager-crook. We need to guess what the second manager really does to promote them. And it’s a far stretch to say the three young guys lead miserable lives. The creators let us in only this far sadly. Plus, the display of remnants of the Polish past seems forced (not a distant past, but a walkman or a bulky PC are long forgotten by young people now). The movie doesn’t serve a purpose of a period drama so why this in-your-face trip down the memory lane?

With all that said, it’s a movie you cannot skip. Yes, it unnecessarily turns into a tribute to Magik towards the end, but the way it is shot and thought through is quite amazing. Plus, the music won’t let you sit still. And Marcin Kowalczyk as Magik is simply brilliant!