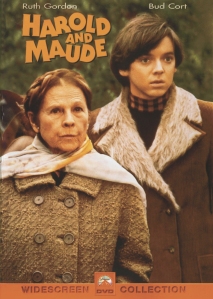 Death looms in every room and around every corner. It comes to those who desire to live and ignores those who want to die. Harold (Bud Cort) and Maude (Ruth Gordon) dance with death, but each of them to a different tune.

Harold lives in a grotesque world. He toys with death, using it as a tool to get back on his cold, empty mother. He breaks all the standards and conventions his Mom follows religiously. We can clearly see she is being ridiculed because she doesn’t express any genuine feelings or human behaviors. However, we immediately notice she’s miserable and trapped in a phony world of higher society with all its dos and don’ts. The sad irony is that if it wasn’t for his Mom’s money, Harold would never have resources to act out all his suicide attempts. The rich world has taken away any illusions and hopes for happiness, providing him with ideas and ways to rebel against it (which for him equals killing himself).

Harold truly begins to live the moment he meets Maude. Both funeral crashers, they meet at one of these when Maude steals Harold’s hearse (what other car would a death-obsessed boy be driving?). Maude comes across as a person vibrant with life and love and happiness for the whole world. She disarms Harold with her honest smile and open personality. She teaches him how not to get attached to things, but rather be spontaneous and live his life without regret. Friendship transform into a relationship and love. Everything about Maude speaks honesty and lightheartedness. And it becomes contagious in the most positive, uplifting way.

The crucial moment in understand their relationship with each other and their relationship with death comes when we realize Maude was in a concentration camp before coming to the States. We see a tattooed number on her arm, but we’re left with no comment from her about it. After all, what comment would there be? At this point, we realize she escaped death and has lived with the burden and images of human cruelty that Harold could never imagine. On the other hand, Harold seeks and befriends death, treating it like a joke. Through his love for Maude he learns how to appreciate life and discovers it has different smells, colors and tastes. In a way, it seems a reverse coming-of-age story: from an old, grumpy man trapped in a boy’s body he becomes a happy young person. His smile is Maude’s smile, her greatest gift for him.

One thought on “…vitality”