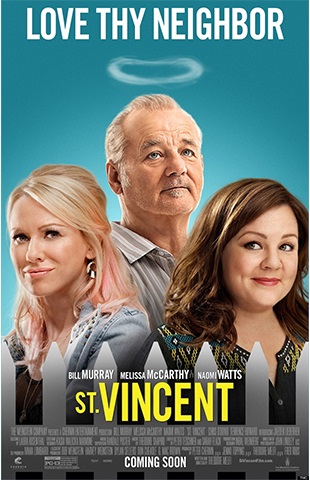 A great comedy with always intoxicating Bill Murray that tricked me into believing a feel-good production like this does not hide an ugly truth about female roles in a men’s world of movies.

The recipe is simple: take an old, lonely, drinking grump (Bill Murray) and pair him with a smart, shy, bullied-at-shool boy (Jaeden Lieberher) who just moved in next door. And then, throw in a single, hard-working, divorced mom (Melissa McCarthy) and spice it with a blond Russian pregrant prostitue Daka (Naomi Watts). The opposites attract. Yet, the attraction oscillates towards the man Vincent. The attraction is so powerful that the grumpy old guy teaches the kid Oliver how to man up and stand up to his bully. In return, the boy shares his friendship with the grump who is notorious for being very unlikeable and lonely. Very touching, right?

The movie seems almost Biblical. It tells a story of redemption. It sides with the ‘all well that ends well.’ It proves that there lives a good guy inside any of us. For this reason, the story resonated with me, it moved me, it made me smile and cry. (A little shy smile and a single friendly tear, but still.) You could call it a positive, feel-good story. So nothing to complain there, right?

As much as it was a pleasure to unveil the story of Vincent, the beautiful and complicated story of alcoholism, gambling debts and a sick wife, it brought me equal pain to see Naomi Watts play the Russian prostitue. The broken branch on Vincent’s favorite tree was more important to the plot than Watts’ entire role. Her fake Russian accent and an idiotic way of speaking was beyond any comic relief, though I doubt it was the intention. She serves no role in the story, just takes up the oxygen. Her sole purpose is to show how lonely, beat-up and dysfunctional Vincent ended up (paying a pregnant prostitute for sex). The story of Daka is in a way Biblical. The prostitute “straightens” her ways by becoming a help for Vincent. She redeems herself by becoming a mother and Vincent’s nurse. She goes from providing men with pleasure to providing a man with help (cleaning and cooking). It doesn’t get more sexist than that.

Finally, there’s the painful underappreciation of Maggie, the role that could and should be expanded. Melisa McCarthy turns the single mom Maggie into a moving, flawed, complicated character, the kind of female character we could use more of. Unfortunately, we only really get one scene when Maggie opens up and shares her feelings and struggles with us. And even then she requires two men (two priests at Oliver’s school) to listen to her. As if the female character needs a man’s permision to take up the time inside a frame, a validation to be important. Even Vincent’s wife with her Alzheimer’s presents herself not a person, but a reason/excuse/result of his drinking and money problems. Those things also resonated with me. Female characters need a role to serve to exist, to be written, whereas male characters exist, make mistakes, are funny or sad. They never serve.

Last but not least, I must mention the soundtrack. In the age where big names make big music for big movies, this soundtrack is like honey to my ears. All the tunes might seem vague to younger gens, but they are familiar to music enthusiasts out there. Needless to say: Wilco, Jefferson Airplain, Bob Dylan, Bill Murray singing Bob Dylan. You couldn’t ask for more.