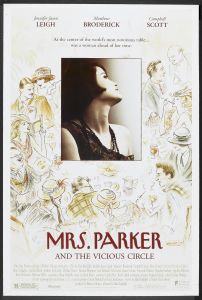 Dorothy Parker (Jennifer Jason Leigh) was a fascinating figure. She was an opinionated, passionate, witty and sharp writer. She was a member of the famous Algonquin Round Table, a New York group of writers, actors, and critics. The movie documents her life, loves, writing, and the Round Table. Yet, it doesn’t do them justice. It presents the facts, but lacks the intoxicated spark of the Roaring Twenties. Sadly, it copies straight from a documentary The Ten-Year Lunch: The Wit and Legend of the Algonquin Round Table (1987), while lacking interesting elements of a featured film.

The movie lacks finesse. From the opening scene, it lacks a coherent story. It lacks an element that would spell-bind us to the screen. Dorothy Parker’s writing, presented in a meta way, is not enough to watch the movie. We could read her, instead. The characters seem distant, disinterested. And that element becomes contagious. How could we care about the characters that don’t care about themselves?

The movie lacks charm. It tries to showcase the 1920’s and 30’s, but putting actors in costumes doesn’t cut it. Old typewriters, jazz music, speakeasies and prohibition are just props that don’t add anything to the story. They fail to create a festive, creative, alcohol-induced atmosphere that’s both stimulating and overwhelming.

The movie lacks attraction. There’s no spark, no suspense, no excitement. We don’t feel chemistry between characters, for example, between Dorothy and Robert Benchley (Campbell Scott), a fellow writer. Since they were both married their friendship and mild flirtation became inappropriate. Yet, we still don’t feel the chemistry between them, the inappropriateness. It has to be spelled out for us by Robert’s wife. The same goes for Dorothy and Charles McArthur (Matthew Broderick), a playwright. They failed to captivate us with their passion for each other and dramatic breakup. We don’t relate to Dorothy’s heartbreak, the heartbreak that triggered one of her suicide attempts.

The movie lacks Jazz Age pace. It goes slowly, dissecting Parker’s words and feelings. All occurrences in her life are explained in a dry way through mere facts. The scenes follow a predictable pattern: a love affair, a heartbreak, an abortion, an attempted suicide. The conclusion – her life was tragic. Now, on to the next one.

The movie lacks literary flare. We don’t get inspired to read. We have no urge or desire to delve into Parker’s works. She quotes them from time to time looking straight to the camera, but those instances provide no frame for the story. They remind us she was a great writer in case we forgot.

Finally, the problem is our lack of being drunk. We should be at least as drunk as all the characters to go with their flow. Otherwise, watching the movie equals partying with drunk friends while being sober. No fun. Dorothy Parker painted in this movie is a depressed, alcoholic emotional cutter who just loves to self-afflict suffering. And she doesn’t appear to have a reason for it since the suffering gets in the way of her writing. Maybe that is the purpose of the movie – to pay the tribute to a great woman who cared more about her writing than her own life story.