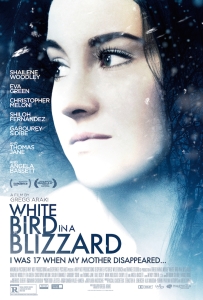 Since we are young parents equip us with insecurities and complexes. And it is our lifetime job to get over them and become normal. What does an AWOL Mom equip her teenager daughter with? How does a young girl deal with everything from sex, desire, school, to parents fighting, sexual frustration, and mother gone missing?

A relationship between mother and daughter is complicated. It is probably the most complicated and formative relationship in a girl’s life. Kat (Shailene Woodley) and Eve (Eva Green) have such a twisted relationship. They seem to be opposite, yet they’re similar, almost the same. Eve is miserable, frustrated, unsatisfied. She hates her repetitive life, her reliable, boring husband, her lack of sexual satisfaction. When we meet Kat we discover she is too. She lives in a dysfunctional, unstable home. Her boyfriend abstains from having sex with her. She feels displaced, looking for something. She is never happy with anything what happens around her. She doesn’t show genuine happiness or peacefulness.

Kat thinks she has life figured out even at 17. She feels grownup. She is in denial about being fine after her mother disappears one day. Yet, her reaction to Eve leaving is defensive. She goes to bed with a much older guy. She resists a therapy. She cannot open up, not to herself, not to her friends or therapist. On the other hand, Eve thinks her life is over. She compares herself to her daughter. She’s jealous of her. Jealous of her youth, her body, her desires.

Kat’s breakthrough comes when she lets go and admits she needs to know the truth about her mother to move on with her life. We see things through Kat’s eyes. Her perspective changes from a rebellious teenager who perceives her parents as crazy losers to a confused young woman who realizes facing the truth, no matter how difficult, is right. But in life sometimes we don’t get to have any closure. That is the realization that Kat must confront and embrace.

The movies’s greatest transgression is the male gaze. Unlike Very Good Girls, another production examining a young woman’s sexuality and loss of a loved one, White Bird comes as sexist and targeted at male audience. Kat shows off her naked, skinny body on many occasions. They way she exposes herself is for male pleasure, not for her own discovery. Her nudity is provocative – either to seduce a man, or shame her mother. In one conversation, we find out she used to be the fat kid. Her best friend Beth (Gabourey Sidibe), an obese girl, is jealous of her for having all that sex, including with a much older guy. We are positioned, practically forced to see those two young girls only in sexual terms, to objectify them. Kat, after losing weight, exposes her body and has sex with guys both young and old. Beth, who is visibly a few sizes bigger than Kat, is never naked and doesn’t get laid. What makes it worse, when Kat seduces the detective the whole scene leaves us with an uncomfortable feeling it is for his pleasure to sleep with somebody half his age. It is not for her pleasure or satisfaction. We cannot escape the male gaze. We cannot relate or sympathize with Kat since this is not a girl’s story. This is a man’s story.